skip to main | skip to sidebar

So The Gimpster and I Bought a House...

Life has been insane lately, as the Gimpster and I bought a house, and closed the end of January.  We had a TON of work to do, with cleaning the house, moving all our stuff, and now painting, organizing, and attempting to unpack.  I have no idea where my camera cord is, so I'll have to show before and after pictures when I find it!

In the meantime, I can say it was a beating.  We spent all Friday after we closed scrubbing the house from top to bottom with my sister's help, while Gimpy changed our locks, installed a new programmable thermostat, and did boy things.  The next morning we got up early, I brought a few bags and beer over to the house, and Gimpy went and got our UHaul. 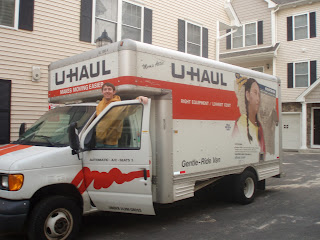 Moving is always an adventure, but it becomes more so when one has two extremely heavy couches, that don't fit through the stairways.  What do you do in that case?  Send them over the balcony.  Sadly, there are no pictures of that.  Imagine instead 6 people on the ground waiting to receive a heavy couch, and 4 people attempting to lower it down to them, without dropping it.  It was chaos.
Then came the fact that I have too much stuff.  Seriously, I think it was asked at least 4 times "how does one girl have so much stuff??"  My friend's newish boyfriend was one thing, but my British friend who has eaten out of our acorn shaped soup bowls, and had a three dimensional Easter Bunny cake... should know why I have so many things!
So, we load up all of my things.  It took a while, and was actually pretty funny considering I had thought for a few minutes that we'd be able to load all of my things and then load up Gimpy's stuff and make one trip. 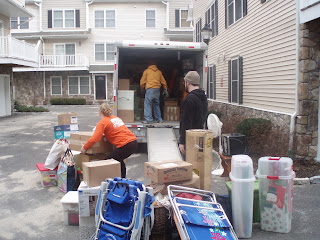 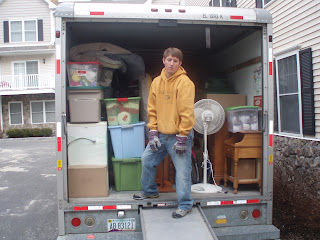 You can see how happy he is...
That's not even all of it.  So, we got all of my stuff over to the house, and started unloading everything.  This was much easier as far as the couches were concerned.  Out of the truck, up about 8 stairs, and into the first room. 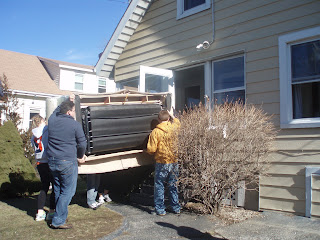 So then the guys went back to Gimpy's house, and the girls and I unloaded 23 boxes straight into the kitchen.  Nope, not an exaggeration, and yes, there were more of them that needed to be unloaded... ha.
It was an exhausting day, but we fed everyone some pizzas, and sent them home.  We unpacked a few more boxes, and I made Gimpy take a nap - he was exhausted, and his knees were killing him.  Then we went out for my dear friend Caroline's birthday, and came home and passed out.  All in all, it was an absurdly full day, before a very full couple of weeks.  Stay tuned for more stories to come from the move.
5 comments